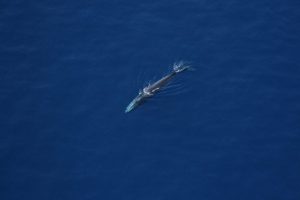 The fin whale (Balaenoptera physalus) is a widely-distributed species found throughout the major oceans, particularly in cool temperate and polar latitudes. They also inhabit the Mediterranean Sea and research shows that these animals form a genetically distinct population. Fin whales are occasional visitors to the Adriatic Sea with the last sightings in 2012 near the Island of Vis and 2017 near the Island of Lošinj. Fin whales are generally found alone or in small groups, with occasional congregations of up to 100 animals in feeding areas. They mainly feed on krill (small copepods), and small fish, particularly mackerel, herring and capelin. The body is hydro-dynamically shaped with pleated throat grooves which can be expanded when feeding. They feed by lunging through the water open mouthed and filtering the engulfed water using baleen. Like other Balaenopteridae, fin whales feed in the summer, ingesting up to one tonne of prey per day, and fast in the winter. The size and speed of this whale limits its natural predators to the killer whale. They are the second largest mammal on earth, exceeded in size only by the blue whale. The body is dark grey above and white or cream coloured on the underside. Females may grow up to 27 m long, weighing nearly 100 tonnes. They may live longer than 80 years. Females usually give birth every two to three years to a single calf, with calving occurring in the winter months after a gestation period of eleven to twelve months. Until the 19th century, and the inventions of the steam power and the explosive harpoon, fin whales were too fast to be exploited by whalers. By contrast, in the 20th century they became the most exploited whale species, with 725,000 killed in the southern hemisphere alone. Their worldwide status is currently unknown. In Mediterranean they are listed as Vulnerable (VU). 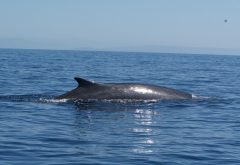 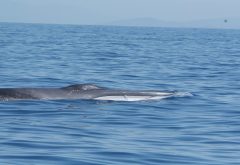 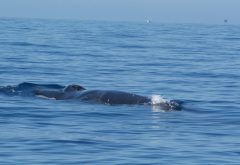 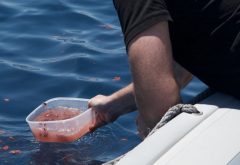 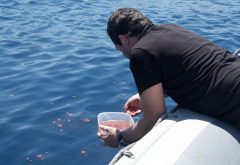 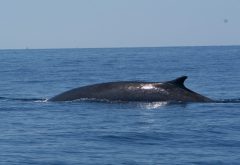