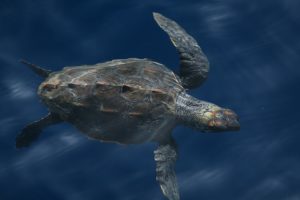 Sea turtles are ancient reptiles that inhabit all marine environments. They have remained unchanged for over 150 million years. Along with other turtles and tortoises, they belong to the order Testudines. There are seven species of sea turtles in the world belonging to the taxonomic superfamily Chelonioidea – the flatback (Natator depressus), green (Chelonia mydas), hawksbill (Eretmochelys imbricata), Kemp’s ridley (Lepidochelys kempii), loggerhead (Caretta caretta) and olive ridley (Lepidochelys olivacea) all belong to the family Cheloniidae; the leatherback (Dermochelys coriacea) is the only member of the family Dermochelyidae. The most common species in the Mediterranean and in the Adriatic Sea is the loggerhead sea turtle. Although turtles are cold-blooded, they regulate their body temperature by controlling the blood flow in the skin and fins. The front flippers are used to propel the sea turtle through the water, while the rear flippers are used as a rudder. The rear flippers are also used by females to dig holes in which eggs are laid. Sea turtles have a sharp beak-like mouth and a strong sense of smell that helps them not only search for food, but is also to find the beach on which hatched.

Threats: the greatest threat to sea turtles is the interaction with humans. Although all marine turtles have a protection status they still suffer from being caught in fishing activities. It is estimated that over 5,000 sea turtles are caught in trawling nets each year in the Adriatic Sea. Often these sea turtles are alive but in a state of hibernation; these animals can be revived and returned to sea with correct treatment but throwing them back while inactive can result in drowning. Set nets present even greater problem in northern Adriatic as almost all of the turtles that are caught drown in the nets due to the extended soaking time. Long-line fishing is also a major factor in sea turtle mortality. Hooks are easily swallowed and create major damage to the digestive tract if left untreated. 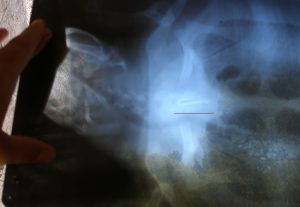 However, relatively inexpensive changes to fishing techniques, such as slightly larger rounder hooks, shorter soaking time, correct recovery on board trawlers and Turtle Excluder Devices can dramatically cut the mortality rate. In addition to fishing threats, large number of turtles die each year from eating plastic bags, bottles and other litter that is thrown into the sea. Floating plastic bags look like jelly fish which is the prey for many sea turtles. Tourism development has also affected nesting sites: lights and noise pollution scare adults and disorientate hatchlings. Hunting and egg poaching are major causes of drastic decline in populations globally. Eggs are considered an aphrodisiac in some cultures and eaten raw. Green turtles are caught for their meat and calipee (the main ingredient in turtle soup). It is estimated that 30,000 green turtle eggs are poached annually in Baja California and that more than 50,000 sea turtles are killed in Southeast Asia and the South Pacific. Olive ridley turtles have been pursued for eggs and their skin used for leather production. In the 1960s, over one million of them were killed annually in Mexico’s Pacific coast. Sea turtles are caught, stuffed and sold as souvenirs for tourists. A thriving international trade exists in products such as tortoiseshell from hawksbill turtles.

Protection: Sea turtles as a group are recognised as one of the most endangered in the world and all species have an IUCN Red List status: Kemp’s ridley and hawksbill sea turtles are critically endangered; the green turtle is endangered; the loggerhead, the leatherback, and the olive ridley are Vulnerable; the flatback’s conservation status is unclear due to lack
of data. All seven species of sea turtles are listed on Appendix I of the Convention on International Trade in Endangered Species of Wild Fauna and Flora (CITES). In European Union, all sea turtles are species of conservation concern and are listed on Annex II of Habitats Directive, resulting in strict protection of all species in all EU countries.

Species of sea turtles in the Mediterranean

Loggerhead sea turtles live up to 60 years and are mature when they are 15 to 20 years old. Females return to the sandy beach where they were born to lay between 80 and 120 eggs in one nest. Loggerheads lay three or four nests each season but only every three or four years. A female will return to the sea if disturbed while laying eggs. Egg incubation time until hatching is 55-60 days. The sex of sea turtles is determined by sand temperature: a higher temperature will produce females and the transitional temperature for the loggerhead turtle is 29°C. Upon hatching the little turtles run in the direction of the Moon’s reflection in the sea water. When they are in the water, they swim as fast as possible to reach relative safety of the open sea. It is not fully known how they navigate once in the open sea, but they may follow sea currents, the Earth’s magnetic field, etc. Only about one percent of the hatchlings will reach sexual maturity.

The lost years: Little is known about the life of the loggerhead sea turtle between hatching and returning to lay eggs in the beaches of the Eastern Mediterranean. With more than 60% of the documented nests laid annually in the Mediterranean, the rookeries in Greece account for the largest loggerhead nesting population in the region. Recent recoveries of loggerhead turtles tagged on nesting beaches that have been reported in the northern Adriatic suggest that this area is important for both adult and juvenile loggerheads. Turtle movements into the Adriatic are likely developmental or feeding migrations and there is probably a major migratory pathway from the Ionian Sea into the Adriatic. Repeated recoveries of the same individuals within a particular year indicate that loggerheads reside in the Adriatic for extended periods of time and also indicate a degree of site fidelity. The northern and central Adriatic, together with the Gulf of Gabès in Tunisia, are the two shallowest (less than 200 m deep) regions in the Mediterranean. A high number of tag recoveries coinciding with these two regions suggest that they are important benthic habitats for loggerheads.

The green turtle is reported in low numbers (since 1830) but, since it may be confused with the loggerhead turtle, its presence is likely to be underestimated. In a recent 3-year survey in a small area (Drini Bay, Albania) there were five green turtles reported in comparison to 402 loggerhead turtles (ratio 1:80; please note that a new still unpublished study by HAS with a bigger sample size indicates a higher incidence of green turtles in the southern Adriatic). Although most records of these two species were from the south Adriatic, this limited number of records does not allow any identification distribution patterns. Moreover, before the NETCET project, green turtles have never been tracked in the Adriatic.

The green turtle is listed as Endangered given the following rationale: “Analysis of historic and recent published accounts indicate extensive subpopulation declines in all major ocean basins over the last three generations as a result of overexploitation of eggs and adult females at nesting beaches, juveniles and adults in foraging areas, and, to a lesser extent, incidental mortality relating to marine fisheries and degradation of marine and nesting habitats. Analyses of subpopulation changes at 32 Index Sites distributed globally show a 48% to 67% decline in the number of mature females nesting annually over the last 3–generations”.

Based on a review paper by Lazar and colleagues (2008) the leatherback turtle appears rather rare in the area, with 30 individuals recorded in the whole Adriatic since 1894. 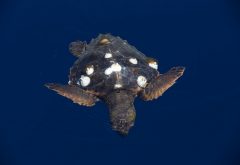 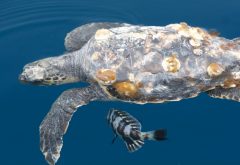 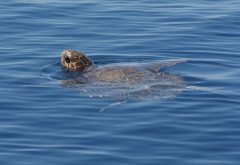 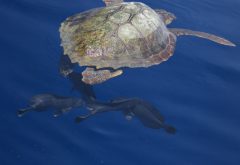 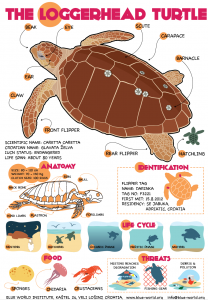